Picking Up The Boat Part 1: The Flight

Once our counter offer was accepted I was eager to pick up the boat. The excitement of owning a boat and the nervousness of changing seasons shortened the timeline.
The boat surveyor told us that the weather changes at the equinox and the passage down the west coast becomes more difficult. Before setting off on any passage, sailors look for windows in weather that offer the best possible wind, current, tide and swell conditions.
I left the morning of September 7 for Seattle. My sister in law Kerri picked me up and we hung out until my nieces got out of school. It was pretty special to be there for their first day of school.
Up to this point I had wrestled with the logistics of getting to Point Roberts Washington. If you haven't been to Point Roberts, it's a pain. To get to this Washington city you have to travel through Canada. As much as we love Canada, they seem a skeptical lot when they heard I travelled from California to look at a boat on my previous trips. So skeptical both times I visited Secret Water before this trip, they insisted I get out of the car and wait in their office until they felt like looking further into my story. 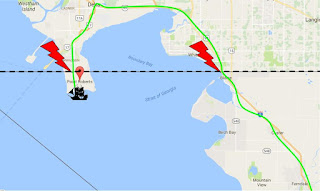 It was hard enough when making a day trip to Point Roberts, now it was going to be the Captain, Ward (Annie's cousin), Cy (my brother) and me. All 4 of us making a one-way trip to Point Roberts, I could only imagine how long we'd have to wait in the Canadian border guard office while they made sure we weren't smugglers.
We found the answer in San Juan Airlines. Turns out San Juan Airlines flies a Cessna 206 from Bellingham to Point Roberts! I couldn't believe it. For about $100 each we flew in the tiny 6 seater and skipped all the border hassles. Money well spent.
There were a couple problems with the flight though. Point Roberts doesn't exactly have an airport and the Cessna wasn't a float plane. The pilot warned us that we were 9lbs under maximum load for the single engine. Our big breakfast and my huge duffle bag full of tools and equipment for the next 3 weeks of working on the boat didn't help.
We were warned that the stall warning alarm will sound as we approach the wet grass strip that makes up the Point Roberts airfield. He needed to slow the plane down in the air as much as possible to make sure we could stop in time. If we couldn't stop he'd gun it and we'd make a second attempt or end up in the big Washington trees. This warning of a stall was just after he told us that if there is a fire we need to put him out first, so he can put out the rest of the fire. I started to think if this was possibly my last flight, ever.
We flew about 3000 feet over the Straight of Georgia on our approach to Point Roberts. On our approach Cy and I looked at each other with big eyes knowing that this could be quite a landing. We saw Point Roberts, then the little grass strip that is the airfield. Bracing ourselves the stall warning didn't sound and the landing was rather uneventful. We kidded with the pilot pretending like none of us was nervous once our feet were touching the grass. One adventure complete, we headed toward the next.

Within a couple hours we untied the dock lines and motored out of the Point Roberts harbor. The first in what is to be a long journey ahead.